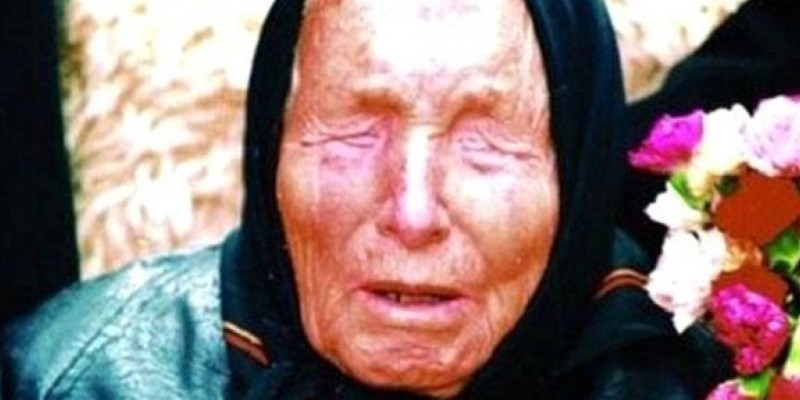 If you are concerned about where our world is heading it would be well to take an interest in Vangelia Pandeva Dimitrova (Vanga 1911 – 1996).  Vanga lived in Rupite, which straddles the borders of Bulgaria, Macedonia and Greece. It is a place said to be a source of incredible cosmic energy.

At 12-years old the child lost her sight in an accident.  When the badly injured girl was discovered she was barely alive. Efforts to save her sight were fruitless but the youngster acquired a sixth sense so simple jobs became routine. The youngster’s predictions began when, as a teenager, she helped her father find a stolen sheep by giving him a detailed description of where it had been concealed.

To amuse herself she played at being a ‘healer.’  Visitors to her home arrived to hear her predictions or cure them of ailments. However, Vanga’s supernatural powers really took shape after she turned thirty. In January 1941, a phantom knight appeared and told her, ‘The world is on the threshold of disaster. Millions of people will die. You will stand here and prophesy. Do not be afraid. I’ll tell you what you should say.’

At the time, Bolshevik Occupied Russia was about to be overwhelmed by the forces of the Reich. It is claimed her famous visitors included Adolf Hitler who ‘departed a very sad man’. Five months later, with 160 Soviet Divisions and 4.5 million Red army troops poised to strike Germany from the East, the German leader pre-emptively struck Russia with disastrous consequences for both Russia and the Reich.

Such were her powers that she spent time in a Soviet prison for predicting the death of Bolshevik dictator Josef Stalin. She was right; the blood-soaked tyrant, buddy of U.S. President Roosevelt and unelected Premier Winston Churchill, was assassinated soon afterwards. According to his daughter, Svetlana, it had been ‘a difficult and terrible death’.

In 1980 the prophetess foretold; ‘In 1999 or 2000, Kursk will be covered with water and the world will weep.’ Vanga’s divination didn’t make sense as Kursk is a landlocked city deep inside Russia. But, in 2000 the Russian nuclear submarine Kursk sank. Its crew of 118 perished before the eyes of a praying agonised world.

In January 1988 the psychic said: ‘We are witnessing events of paramount significance. Two big leaders shake hands.’ Soviet President Mikhail Gorbachev and U.S. President Ronald Reagan were soon to do so heralding the collapse of the Soviet Union.

Later Vanga declared, ‘American brethren will fall after being attacked by the steel bird. The wolves will howl in the bush, and innocent blood will flow.

In 2001 the New York situated World Trade Centre ‘collapsed’ after two commercial planes were flown into them. Was the term ‘bush’ connected to the name of the U.S. President at the time? Her reference to innocent blood being shed reminds us that, as a consequence 9/11, wholly innocent countries were invaded and occupied.

Vanga was later to say; ‘Numerous catastrophes and disasters will shake the world. The mentality of the people will change. They will be divided by their faith.’ Clearly, this prediction of Vanga’s has since been underscored by the calamity that has engulfed North Africa, the Middle East and now Western Europe.

Of her motherland, Vanga was more upbeat: One of her predictions is that when permafrost thaws and floods come, nothing will survive on earth but Russia. The climate will change and Russia will occupy the best inhabitable zone.’

Was the permafrost a clue as to the likely consequences of a full-blown nuclear war between NATO and the Russian Federation? Russia is a vast country many times the size of the United States.  If Russia was victim of a nuclear attack the consequences would be disastrous but not catastrophic. The much smaller U.S., already suffering economic and social collapse, would become a glass-strewn parking lot.

From this point the prophetess predicted that world peace will flourish in the face of good fortune. ‘Everything melts away like ice yet the glories of Vladimir, the glory of Russia, are the only things that will remain. Russia will not only survive, it will dominate the world.’