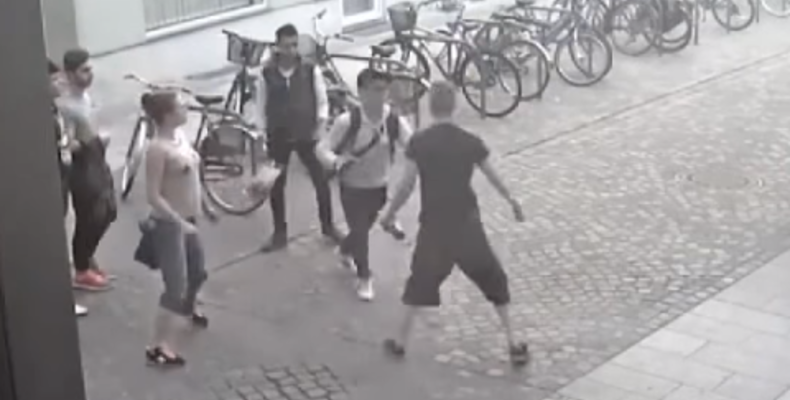 According to a report from German news portal Focus Online, police in Dessau-Roßlau, a town of 80,000 in the state of Saxony-Anhalt, has admitted to using illegal methods against Karsten Hempel, aged 56, whose 30-year-old son Marcus Hempel was murdered in an assault by a Syrian asylum seeker in broad daylight on the streets of Wittenberg in 2017, insinuating, without evidence, that the grieving father was planning to take revenge on the migrant.

The Syrian perpetrator, Sabri H., was convicted, not for murder or for manslaughter but for ‘bodily harm resulting in death’ in March 2020, and was sentenced to just two years of probation and 120 hours of community service.

The juvenile criminal chamber at the Magdeburg District Court considered the sentence to be adequate because Sabri H. was just 17-years-old at the time. The migrant arrived in Germany in 2015 as an unaccompanied minor but now lives with his parents and siblings after they used family reunification laws in Germany to migrate to Germany.

Attempts by Hempel to obtain the sums stipulated in the judgement failed, as Sabri H. claimed to a court’s bailiff that he had no savings or other assets to seize. Additionally, Hempel told the court that Sabri H. had been violating the terms of his probation since he was not living at his registered address, but instead had moved in with a friend. According to the probation order, the Syrian would have had to report this move to the court, which he had failed to do. Subsequently, Hempel’s lawyer asked the public prosecutor to launch an investigation into the possibility of Sabri. H violating the conditions of his probation.

In December of 2020, following the Hempel’s investigation and failed attempts to obtain the restitution that the Syrian convict owed him, police received information that he wanted to take revenge on his son’s killer.

Immediately afterward, a pair of criminal investigators visited Hempel at his place of work and issued him a ‘threat notice’. According to Focus Online, investigators instructed Hempel to refrain from ‘instructing or inciting’ or ‘harming or threatening’ Sabri H. Police then threatened Hempel with ‘further security measures’, which included imprisonment if he failed to follow their instructions.

After being issued the notice at his workplace, which could’ve permanently damaged his professional reputation, as he was categorized as a potentially violent criminal, Hempel took legal action against the police for ‘false suspicion, defamation, and feigning a criminal offense’.

In March of 2021, police admitted to Hempel that the measures which had been taken against him were in fact unlawful. In a letter written to Hempel, police stated that ‘there was no evidence of a specific risk situation in the present case’ and that ‘the prerequisite for issuing a prohibition notice (addressing the person causing the threat) had not been met’.

Internal police emails obtained by Focus Online revealed that authorities were well-aware that Hempel posed no threat to the Sabri H., and that the notice issued to him went ‘far beyond what is permissible in this context’.

Hempel has referred to the incident as a ‘scandal’ and likened the authority’s behaviour and actions, which the police themselves have admitted were based entirely on unfounded claims, to the German Democratic Republic’s (GDR) secret police, or Stasi.

Roughly one year after his son’s killing, Hempel was heckled by far-left activists while speaking out about the incident at a demonstration in Schweinfurt which took place after a 15-year-old girl was stabbed to death by her migrant ex-boyfriend. The grieving father was then portrayed as a ‘Nazi’ by German media for speaking about the killing of his son at the event.