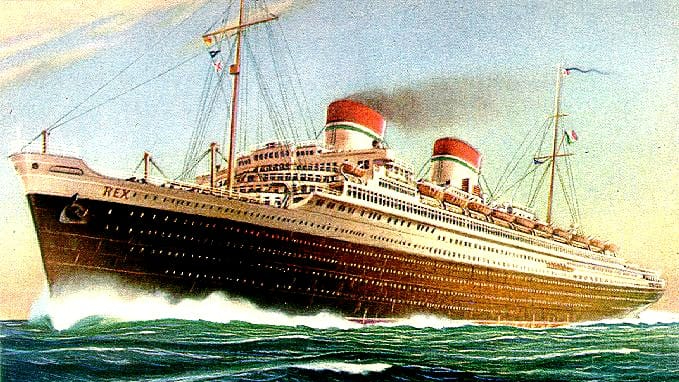 She was Italy’s one and only Blue Ribband champion. The renowned Blue Riband was coveted by the great shipping companies of history being awarded for passenger-carrying liners making the fastest crossings of the Atlantic Ocean.

Fascist Italy’s superliner whose opulent interiors were created to evoke all of the lustre and glory of the Sistine Chapel itself. When the Rex first came into service in September of 1932, she was literally a ship that cocked a snook at every accepted norm of the era.

While the avant-garde designs and stylings of the Art Deco era was now almost mandatory for every new, first rank ocean liner, the Rex instead largely embraced an overall, classical theme in her interior decor, with more than just a passing nod to the Renaissance era.

Interestingly, it was Fascist Italy’s Benito Mussolini who forced through the shotgun marriage of rival, bickering Italian shipping companies that resulted in the monolithic Italian Line.

This new, Italian national flag carrier was to be headed up by a first-rate brace of complementary liners which, in terms of scale, style and, above all speed, were intended to be fully the equal-if not actually superior to any of the rival ocean greyhounds running from northern European ports.

Those two ships were the Rex and her resplendent running mate, the Conte Di Savoia. Sailing on the warmer, more languid ‘sunny southern’ route between Genoa and New York, they were jointly advertised and acclaimed as ‘the Riviera afloat’.

But this was no mere advertising blurb. Italian dedication to creating both the spirit and the actual reality, of ‘dolce vita’ afloat was writ large in the vast, expansive open lido decks that each ship boasted across all classes.

There were outdoor swimming pools, cafes with umbrella shaded tables and chairs, and scores of smart, snappily dressed waiters to bring drinks to its indulged passengers as they enjoyed the same ambience of Amalfi, Portofino, and Sorrento.

Literally, nothing like these stunning twin vessels had ever been seen before. At one stage, the Rex even had real sand scattered across her lido decks, in an attempt to create an artificial beach. This proved hopelessly impractical; in the first hint of a breeze, that sand became an unwanted garnish for every snack that emerged from the galleys.

But still, even the very idea spoke to the Italian dedication to creating a kind of freewheeling, beautifully finessed floating ocean resort. The current generation of Europe’s large cruise ships was massively influenced by this brace of glamorous, gilded Italian giants.

Turning defeat into victory, the Rex got off to one of the most inauspicious starts in maritime history. Waved off from Genoa by Benito Mussolini himself in a massive blaze of publicity, and with a guest list of glittering, international celebrities on board, she set off for New York on September 27th,1932.

Two days later, the superlative ocean liner broke down. The Rex limped into Gibraltar, enfeebled and embarrassed, there to wait two days while spare parts were rushed out to her from Italy.

About half of her passengers abandoned their voyage. Despairingly, they travelled by overnight train to join the Weimar Republic of Germany’s liner, Europa, was due to sail from Bremerhaven.

Ironically, when the Europa subsequently docked in New York, the repaired Rex had already arrived in Manhattan. Mussolini’s flagship was berthed at her pier as the Europa sailed past her, heading upstream.

The pride of Fascist Italy’s superliner soon recovered both her poise and her pace. In August of 1933, the Rex captured the Blue Ribband of the Atlantic for the fastest ocean crossing. In celebration of the event, the big Italian liner hoisted a long, blue pennant that she flew on every voyage.

The Rex was a unique combination of elegance and excess whilst much of the West deep in a recession that only war could bring relief from suffered over 10 million deaths from illnesses related to food deprivation.

Like their great British, French and German rivals, both the Rex and the Conte Di Savoia were vast, national statements of intent. They were, quite literally, ‘Italy afloat’. The profits were measured in terms of prestige, rather than any actual returns to the financial purse.

Neither ship would survive the war. After four years berthed at her pier in wartime Italy, the Rex was commandeered by the relieving German forces. It has been wrongly claimed that they intended to sink the vast liner across the entrance to Trieste harbour, in an attempt to deny the advancing Allied forces both the port and the proud ship herself.

As a result of repeated Allied bombing raids on the port of Trieste itself, on September 5th, 1944, the Rex was towed several miles down the Istrian coast, to an anchorage somewhere between Capodistra and Isola.

Three days later, on September 8, 1944, scores of low flying American, British and South African fighter bombers lanced the defenceless ocean liner with scores of rockets as she tried vainly to seek shelter in the bay.

The now sitting duck defenceless and once proud, illustrious Rex staggered under the incendiary blitz of scores of rocket strikes. Eventually, wearing a vast, billowing column of thick, black smoke as her own funeral shroud, the Rex sagged over onto her side and sank halfway into the shallow waters of the bay.

After the war, serious consideration was given to salvaging and repairing both the Rex and the Conte Di Savoia, which had endured an almost identical, fiery fate. But, in the end, both projects were deemed impractical, and the two ships-among the finest of their kind ever built-were butchered for their scrap value.

While there were many cases of ships being sunk to block harbour entrances during the war. I do not believe the crew that commandeered the REX had that intention. The evidence is quite clear in regards to where she suffered her inglorious end far from the actual harbour of Trieste.

She was actually towed quite far from Trieste and anchored off the Istrian coast between Isola and Capodistria, where the Allies intercepted and would needlessly destroy her.

If the Germans didn’t want her to fall into Allied control, they simply would have destroyed her like they did Conte di Savoia a year prior.