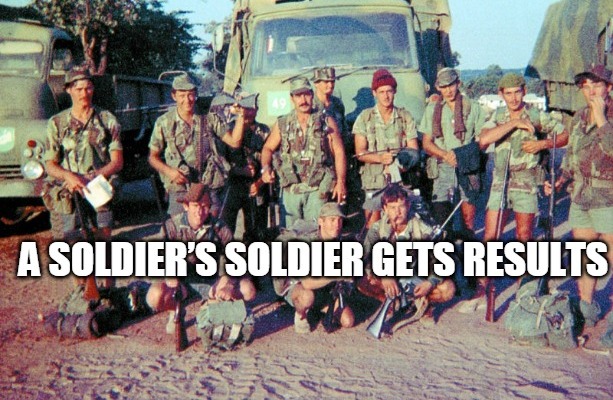 The colourful commander served with the all-Rhodesian C Squadron 22 of the Special Air Service in counter-insurgency operations in the Federation of Malaya. He became a Member of the Order of the British Empire in 1963.

Reid-Daly rose to the rank of regimental sergeant major in the Rhodesian Light Infantry, and was later commissioned and achieved the rank of captain. The soldier’s soldier who formed the famed Selous Scouts worked his way up through the ranks and became a Regimental Sergeant-Major.

Drawing on his Malayan experiences Reid Daly built up a skilled and highly professional regiment from scratch. It performed magnificently in the field but its unorthodox methods won him few friends in the regular army. Reid-Daly had several brushes with the Rhodesian authorities.

In 1979, rumours surfaced in Salisbury that the Scouts were poaching ivory along the Zambezi valley. These rumours were never proved, and the colonel, as a well-known conservationist, dismissed the allegations as ridiculous.

In the process of defending himself against them, Reid-Daly verbally attacked Major General John Hickman. For this, he was charged with insubordination and sentenced to a reprimand. Disgusted, he resigned as the commander of the Scouts in August but continued to fight a legal battle against the judgement, proclaiming his innocence even after Rhodesia transformed into Zimbabwe Rhodesia, and only stopped doing so after he was forced to flee to South Africa in 1982.

In South Africa, Reid-Daly became commander of the Transkei Defence Force, and he was subsequently the leader of the private security firm Security Services Transkei. For the final decade of his life, he lived near Cape Town. In his retirement, he authored several books on his wartime experiences.

MICHAEL WALSH is a worldwide journalist, broadcaster and author of 70 book titles with 36 years experience. Like other journalists of integrity, he no longer writes for corporate media, opting instead for true journalism.

African odyssey is the author’s collection of four books based on his first-hand experiences. Michael Walsh lived, worked and socialised in most of Africa’s nations from Cape Town to Tripoli, Lagos to Zanzibar on the Indian Ocean.