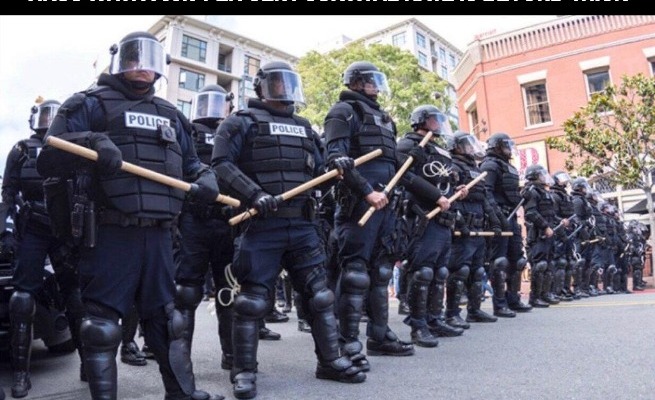 Suppressed by corporate media but thanks to the internet we are learning of hundreds of anti-repression protests flaring up across Europe from the Baltic to the Black Sea.

Over this weekend alone thousands of angry people took to the streets of the German city of Leipzig on Saturday to protest against the government’s repression using Covid-19 as a smokescreen to usher in a totalitarian regime similar to that in the Stalinist USSR or Maolist China.

Columns of a massive state agent force were deployed to Leipzig where a total of 12 protests were scheduled to take place. As in Moscow in 1990 and elsewhere in Europe during the collapse of the Soviet Union, armoured police vehicles were seen on the city’s streets.

More than 10,000 people gathered in the city centre near the Leipzig Opera to voice their fury with the measures taken by the federal and regional authorities allegedly to contain the spread of Covid-19.

The furious citizens demanded freedom and protested mandatory vaccination. The state operatives many of them uniformed designated a second meeting area for the demonstrators at nearby Goethestrasse Street after the crowds massively exceeded one thousand people, was exceeded.

Footage showed a tightly packed crowd occupying a large area not far from the Opera. People were waving German flags and were holding banners that read: ‘No to dictatorship’ and ‘Freedom instead of despotism’. The crowd was cordoned off by police agents wearing riot gear and at least two water cannons were seen deployed to the square.

At a certain point, the crowd protesting the Covid-19 measures attempted to stage a march along the city’s ring road. The fully armed state operatives intervened and blocked the march, arguing that no marches were allowed in the city because of Covid-19 restrictions.

The situation quickly escalated. Videos published on social media (mainstream camera crews were absent) showed intense clashes between the protesters and the police as some rally participants sought to break through the law enforcement cordon. Police used pepper spray in response.

Arrested for their political beliefs, the officers detained 24 people the agents claim are members of various right-wing movements even before the clashes erupted. ‘These people were taken into custody because of their behaviour and the objects they were carrying,’ the spokesperson said on Twitter.

The massive demonstration came after the Saxony government announced the tightening of restrictions for those unvaccinated amid rising infection numbers. Only those who have received what is dubbed the genocide-jab will be allowed into indoor catering facilities, bars, clubs, and various public events with more than 1,000 participants, both indoors and outdoors.

And in many other cities including London: Clashes erupted between police and participants of the annual Million Mask March in London, as anti-regime demonstrators set off fireworks at officers and burned an effigy of British Prime Minister Boris Johnson.

Italians have been protesting against the green pass, an electronic COVID-19 vaccination certificate, for weeks already, with the largest demonstrations taking place in Milan, Rome, and the port of Trieste.

Clashes were reported between law enforcement and protesters in Trieste and Milan in northern Italy on Saturday night. Several thousands of protesters against the mandatory green pass tried to break into Unity of Italy Square in Trieste, where demonstrators are not allowed by the government until the end of the year per the city authorities’ decision. Police used batons against protesters to drive them away from the square.

Journalists working for state complicit media claimed that protestors threw chairs and tables from local bars, as well as glass bottles at the carabinieri and police officers. As protesters started to leave the city centre, many staged a sit-in demonstration.

In Milan, around 14,000 demonstrators who took to the streets unexpectedly changed the route approved by the authorities, and the state agents blocked the crowd near the University of Bocconi. Small groups of protesters tried to break through the chain of law enforcement officers and lit smoke bombs.