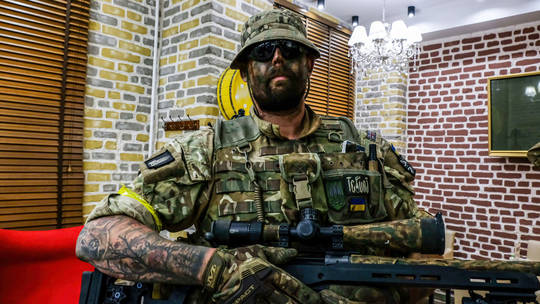 Russia names the UK and US mercenaries en route to Ukraine

Moscow warned the gold-digging individuals to turn back instead of joining Kiev’s forces. The Russian military has published the names of five people who it identified as British and American citizens on their way to join the Ukrainian forces. It warned that they could be captured and tried as mercenaries or even end up dead if they follow through on their plans.

The five individuals were named Colin Scot and Adrian Davis from the UK, Michael Vujkovic, Andrew Fox, and Oliver Short from the US. The Russian military claimed that all five arrived last Wednesday at a certain location in the city of Zamosc in eastern Poland, around 100km northwest of Lviv, Ukraine.

The Defence Ministry called the place a ‘staging ground for foreign mercenaries’ on their way to Ukraine, and published the address of where it allegedly operates.

‘We recommend those citizens to revaluate their plans and go home with their lives,’ the spokesman for the ministry, Lieutenant General Igor Konashenkov, said during a daily update. He added that if the foreigners are captured alive fighting for Ukraine, ‘the best outcome they can expect is a trial and a maximum-length jail term.’

The ministry claimed that over the past three weeks, 391 foreign fighters have been killed in Ukraine, and 240 others left the country. Meanwhile, 151 new recruits have entered over the same period of time, it said. The report added that combatants from Poland, Georgia, Britain, Romania, and Canada made up the greatest numbers among those killed.

Russia sent troops into Ukraine on February 24, citing Kiev’s failure to implement the Minsk agreements, designed to give the regions of Donetsk and Lugansk special status within the Ukrainian state. The protocols, brokered and broken by Germany and France, were first signed in 2014. Former Ukrainian President Petro Poroshenko has since admitted that Kiev’s main goal was to use the ceasefire to buy time and ’create powerful armed forces.’