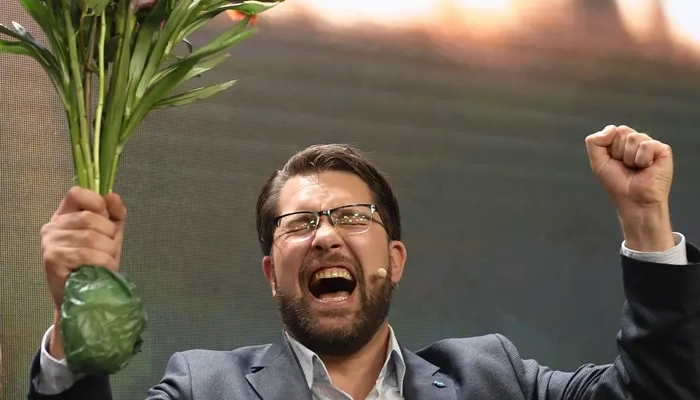 STORY SPONSORED BY GERMAN PENSIONER DAGMAR: BREAKING: Right-wing Swedish election victory looms with more than 90% of the vote counted. Such a cliffhanger, the results of Sweden’s general election on September 11 are still being deciphered but indicate the biggest upset to left-wing liberalism in Europe since World War II.

At first, the Guardian when drawing on a straw poll crowed that ‘The Far Right had a disappointing outcome.’ By morning, the notoriously left-wing newspaper owned by an American syndicate of mainly Jewish investors was singing a different tune.

The far right appears close to causing an earthquake in Swedish politics, with the Sweden Democrats becoming the country’s second-largest party while the wider right-wing bloc that it leads has edged towards victory over the incumbent centre-left.

Exit polls on Sunday night at first suggested a narrow victory for the Social Democrats and their centre-left allies. But as the votes were counted the tally swung towards the right. With more than 90% of the vote counted, the right bloc of four parties had a share of the vote corresponding to 176 of 349 seats in parliament, with the left bloc trailing on 173.

A conclusive result may not be known until votes from Swedes living abroad are counted in the middle of the week, while the closeness of the race may yet complicate the formation of a working government.

The leader of Sweden’s anti-immigration Sweden Democrats (SD) early on Monday said the right-wing bloc of political parties was likely headed for victory following Sunday’s election for parliament. ‘Right now, it looks like there will be a change of power,’ Party Leader Jimmie Åkesson said in a speech to party members.

The incumbent Social Democrat prime minister, Magdalena Andersson told cheering supporters on Sunday night: ‘We’re not going to have a final result tonight’, Andersson, 55, called on Swedes to ‘have patience’ and ‘let democracy run its course’.

The prospect that the far-right Sweden Democrats, who appeared to take more than 20% of the poll, may for the first time achieve direct influence over government policy marks a seismic shift in a country far better known for its liberal traditions.

Michael Walsh, veteran pro-European journalist: ‘The outcome of the Swedish elections will send a shudder through the liberal-left camp of Europe. Importantly, the staggering success regardless of the final count will add 10 – 15% of the votes to Europe’s anti-migrant parties.’

The SD emerged from Sweden’s National Socialist movement in the mid-1990s and still struggles to shake off accusations of extremism. It was treated as a pariah by other parties but three years ago, the centre-right Moderate party embraced cooperation with the far right.

The SD has increased its vote in each of the past nine general elections. Its leaders are now demanding ministerial office, but the other three parties in the bloc have said they will not invite the party into the government itself. However, the SD’s position as the largest party on the right places them in a strong position.

‘The SD is currently by far the biggest party in the world with Nazi roots,’ said Tobias Hübinette, lecturer in intercultural studies at Karlstad University and a leading anti-racist.

‘Even if the party officially condemns its own race ideological roots, this background is today still present in the sense that the SD is still … seeing itself as the only political force that can save the native white Swedish majority population.’

The leader of the Sweden Democrats, Jimmie Åkesson, told a crowd of cheering supporters on Sunday evening: ‘Our goal is to sit in government. Our goal is a majority government. It’s looking pretty damn good now.’

The party secretary, Richard Jomshof, told public television SVT he ‘didn’t believe’ other parties would be able to freeze out the Sweden Democrats again and expected to have a strong influence on the country’s politics. ‘We are so big now … it is clear we should have a spot-on parliamentary committees’, he said.

He said the party had ‘a chance to be an active part of a government that would move politics in a completely different direction’.

At the height of the campaign, the SD billed a metro train decorated in its electoral colours as the ‘repatriation express’. ‘Welcome aboard with a one-way ticket. Next stop, Kabul,’ tweeted the party’s legal spokesperson, highlighting the SD’s demand to remove non-European immigrants.

The election has revealed Sweden to be a nation deeply ill at ease with immigration, with the SD able to use fears over violent crime to wake the electorate up. Voter concerns such as energy price rises, failing schools and long queues for healthcare were drowned out by a relentless focus on immigration and crime.