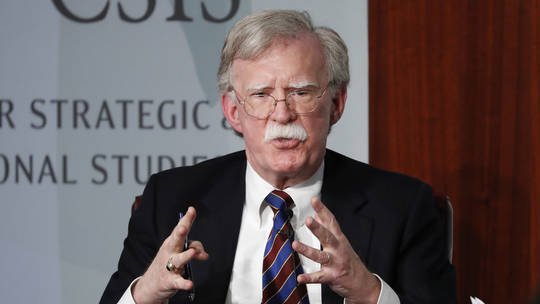 Journalist Tayler Hansen pressed the former national security advisor on US ‘war crimes’: what happened next to the plutocratic United States as being the opposite to its much-vaunted ‘Land of the Free’ mantra.

Former US national security advisor John Bolton joked about the First Amendment as a protesting journalist was detained for accusing him of lying about weapons of mass destruction and ’covering up war crimes in Afghanistan.’

Bolton’s speech at an Institute for Policy Innovation conference in Texas on Thursday was interrupted by journalist Tayler Hansen, who stood up and accused the long-time war-hawk of lying about Iraq possessing weapons of mass destruction prior to the 2003 US invasion.

‘You essentially genocided the Iraqi people,’ Hansen shouted at Bolton. ’And you covered up war crimes in Afghanistan, sir.’

‘Why did you celebrate the arrest of Julian Assange?’ Hansen continued. ’Why do you think that’s acceptable, sir? Is celebrating war crimes acceptable?’

Hansen was detained by security and removed from the conference. As he was led away, Bolton drew applause from the crowd when he remarked ‘that’s another example of the First Amendment at work,’ referring to the US Constitution’s guarantee of free speech. He might have said differently: ‘that’s another nail in the coffin of the First Amendment at work.’

Bolton served in numerous positions in the Reagan, Bush Sr., and Bush Jr. administrations, before a stint as Donald Trump’s national security adviser in 2018 and 2019. He was sacked by Trump after advocating regime change in Iran and apparently scuppering peace talks with North Korea, with the then-president claiming that ’we would be in World War Six by now’ if he listened to Bolton’s advice.

Bolton has also advocated for US intervention in Iraq, Afghanistan, Syria, Venezuela, and most recently Russia. In 2018, he threatened to sanction the International Criminal Court in The Hague if it prosecuted Americans for alleged war crimes in Afghanistan, and last month he told the wife of WikiLeaks founder Julian Assange that he hopes Assange ’gets at least 176 years in jail’ for publishing evidence of said war crimes.

Hansen was handcuffed and led to a parking garage before being set free.

‘Most notable people that work in the National Security Apparatus are psychopathic criminals with no moral compass,’ he wrote in a tweet on Friday. ’I’m not sure what ‘National Security’ has to do with it, but there is definitely a pattern.’