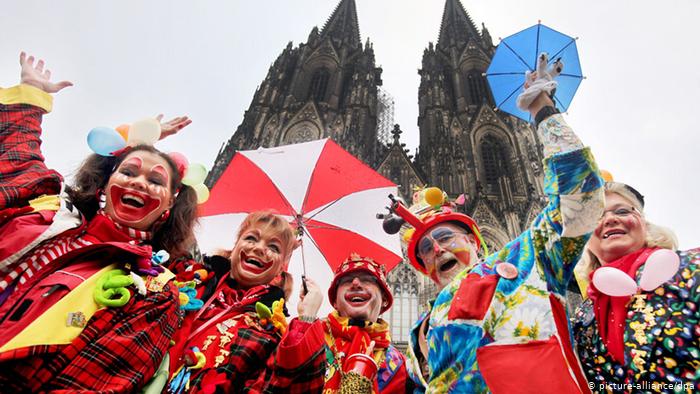 Carnival in Cologne is almost as old as the history of the city itself. But it has been celebrated in the organized fashion we know today for only about 190 years. The Greeks and the Romans celebrated joyous spring festivals in honor of Dionysus and Saturn with wine, women and song. The ancient Germans celebrated the winter solstice in order to pay homage to the gods and drive out the evil demons of winter. In later times, the Christians adopted these heathen customs. Lent, the period of fasting before Easter, was ushered in by carnival (carne vale = Farewell to meat!).

Fear of emptiness: Carnival in Venice goes without tourists

The legendary Venetian carnival is in full swing – alas, this year it takes place without tourists, online. Details – in the gallery of “Izvestia”.

‘It symbolises the end of the year and the new one beginning’: folk dance in Romania

These festivals are unique and have an incredible energy – everyone has a great time dancing and singing. This particular image was captured at a festival in Botoșani, Romania.

Home in the Alps – How mountain villages keep their tradition | Stories and Discoveries.
Here you can learn much about the daily life of the villages located high in the Alps – How to graze cows in the pasture, how to collect and store chestnuts, store cheese, bake homemade bread, harvest crops, celebrate national holidays. Old people pass on their invaluable experience to the younger generations.

Despite the bitter frost and coronavirus. Russians met Epiphany with traditional swimming in an ice-hole – video

On the night of January 18-19, the Russians celebrated an Orthodox holiday – Epiphany and the believers bathed in ice-holes, despite the abnormal frosts that covered many regions of the and including the capital. In Moscow, for example, the air temperature dropped to minus 23 degrees. Some regions have canceled traditional bathing because of the coronavirus, but most officials organised special fonts, near which doctors, rescuers and police were on duty. In the Moscow region, about 220 ice holes were equipped and entrances to them with convenient parking, TASS reports.

Eastern Epiphany: the history and traditions of the holiday – January 18-19

On January 19 (January 6, old style) Eastern Christians celebrate the Baptism of the Lord, or Epiphany. Baptism, like Easter, is considered the oldest holiday in Christian culture. This day is associated with the gospel event – the baptism of Jesus Christ by John the Baptist in the Jordan River. Here you can read about the history, meaning and traditions of the holiday.

Christmas Nativity Scenes of the World

How did the nativity scene come about? What are its names in different countries? What does it look like and what are its features? Which nativity scenes are considered the largest in the world and why? All the answers are below.

Malanka is a Russian, Ukrainian, Belarusian, folk holiday celebrated on 13 January, which is New Year’s Eve in accordance with the Julian calendar (see Old New Year).

One of Kraków’s most unique and singular Christmas traditions is the popular creation of ‘Christmas cribs’ or ‘szopki.’ While many churches across the country display elaborate nativity scenes during the holiday season, ‘szopki krakowskie’ (as the local variety are called) are so idiosyncratic to Kraków, that they were just added to the UNESCO Intangible Cultural Heritage List. Something of a strange cross between a nativity scene, gingerbread house and garish dollhouse, szopki krakowskie are the bizarre result of a slowly evolving folk tradition that dates back to the Middle Ages.