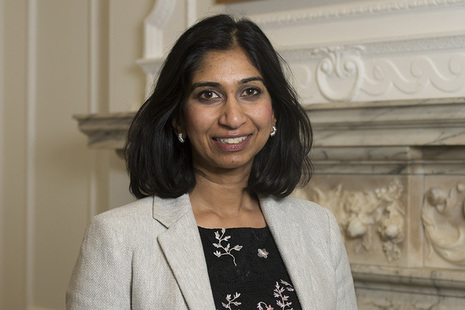 Those of alien race, culture and religion are allowed to claim privileges without a good reason to avoid deportation, the home secretary admits. The migrant crisis in Britain is ‘out of control’ due to legal loopholes, Home Secretary ethnic-Indian Suella Braverman told local media on Saturday.

Fool me once shame on you. Fool me twice shame on me: I don’t know what this observation makes of my fellow Britons and Irishmen who repeatedly across the years and the decades bear the burden of naively and childing trust in known liars.

The value of rights owned by the Queen’s property company to exploit the seabed around Britain’s coastline has swelled to £5bn after a record-breaking auction of plots for offshore windfarms.

Devotees to political correctness would be horrified should they chance upon the racism inherent in every remark made by Cecil Rhodes (1853-1902).

In the United Kingdom, traffic recently stalled on several busy motorways due to a fuel price protest organized by motorists. They deliberately slowed down and even played football on the roadway to attract the attention of the Westminster regime and force it to solve the problem of rising fuel prices, according to The Times.

In the autumn, Latvia’s President Egils Levits will nominate a compliant politician to the post of Prime Minister for the second time during his term. The Latvian electorate has no say in this process.

BRITAIN set to destroy unwanted PPE equipment losing €4 billion according to a report issued by the Public Accounts Committee issued on June 10. However, critics note that the ruling elite that invested in these unnecessary products profited enormously from their investment in the manufacture and distribution of the PPE equipment. The profits will not be returned to the taxpayer.

Dmitry Medvedev, the former President of Russia and now Deputy Chairman of the National Security Council has become one of the most hardcore Russian politicians after he admonished Ukraine leaders to stop using cocaine and start negotiating peace with Russia.

If you thought the U.S. election in 2020 was bad, it’s nothing compared to the sham election that just went down in France. Emmanuel Macron, a former Rothschild banker and World Economic Forum ’Young Global Leader,’ may have been crowned the ‘winner’, but millions of Le Pen voters lost their ballots and rights on Sunday.