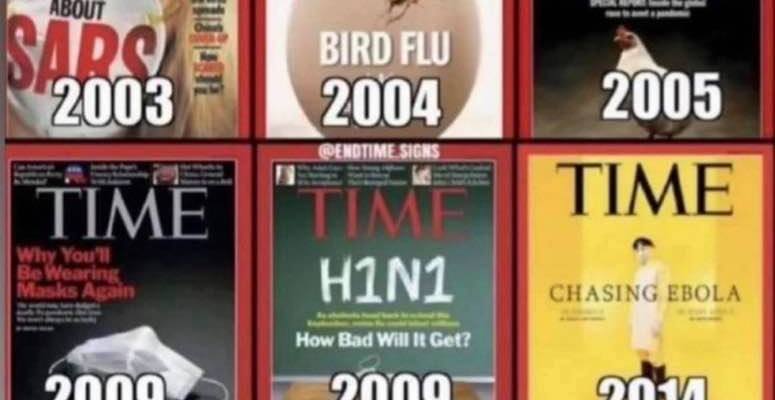 Creating and Stampeding Fear to Rule the World

We live in an age of global deception and delusion of Biblical proportions. Lying is a way of life. Deception is taken to the level of an art form. Debauchery and corruption are everywhere.

The slick propaganda that promises to eliminate poverty, create wonderful jobs with dignity and bring lasting peace to the world has more in common with a pile of horse manure than lasting solutions.

I stated in early 2020 that the Great Panic of 2020 was the start of Technocracy’s coup d’état. It was global in scope, horribly damaging to the global economy and ripped the fabric of communal status quo to shreds. All of this was supposedly caused by an unseen enemy. And now, the so-called self-styled scientists behind it, like Dr Anthony Fauci, are proven to be frauds and hucksters whose science has been discredited as pseudoscience at best.

May I remind you that global warming is also an unseen enemy of the same magnitude? The corrupt and bastardized data supporting global warming is as fraudulent and deceptive as that of COVID-19. Fabricated computer models spit out megatons of buffalo chips to tell us we are all going to die when the polar ice caps melt and the seas rise.

I have also warned that there will be other attacks of deception to solidify the global Technocrat takeover. The Technocrats are delivering.

Two major back-to-back hacking episodes have suddenly appeared to underscore the need for a universal ID system and total control over the Internet. First, the Colonial Pipeline was shut down causing massive fuel shortages on the East Coast. Second, the largest meat producer in the world is hacked bringing production to a halt. Gas prices go up. Meat shortages threaten availability. All thanks to an invisible enemy they call ‘the hackers’ who we are told are some dark, deep-state entity trying to destroy America and Western values.

Let’s pause and remember that the Great Panic of 2020 was preceded by a global pandemic simulation called Event 201, sponsored by the World Economic Forum. This is a fact, not speculation. Event 201 scripted the pandemic response almost to the letter. The globalist cult was prepared and in control.

Cyber Polygon scripts a global response to a high-profile cyber-attack: With global digitalisation further accelerating and people, companies, and countries becoming ever more interconnected, security of every single element of a supply chain is the key to ensuring the sustainability of the whole system.

During the technical exercise, participants will hone their practical skills in mitigating a targeted supply chain attack on a corporate ecosystem in real-time.

What a coincidence that two major supply chain hacks suddenly appear out of the blue, affecting potentially hundreds of millions of consumers and scaring the pants off the rest of us. Who are these invisible hackers anyway? Why can’t anyone catch them in the act? Well, anonymity is part of the script, just like the COVID-19 virus, because the cause is of no interest to the likes of the WEF, but only their response to it.

Now, out of the blue literally, talk about UFOs is everywhere. The propaganda machines are in full swing as the government and military release tapes, recordings and documents that suggest aliens have arrived on planet earth.

Can they produce one spaceship or one alien body? Nope. How about a clear picture or photograph? No: it is just another invisible enemy being conjured up to stoke a socially engineered response in worldwide populations.

On June 2, former President Barack Obama weighed in on aliens and UFO sightings. The Daily Star (UK) reported and has predicted that if evidence of aliens emerges, it will lead to sweeping changes around our planet.

The former US President said that proof of aliens would likely result in the emergence of new religions, and there would be calls for huge sums of money to be spent on weapons systems so we can defend ourselves from possible attack. How convenient for the arms conglomerates. He was asked what he thought would happen if we could prove there were aliens probing the Earth but we were unable to make contact with them or interact with them.

No doubt there will be immediate arguments about like, well, we need to spend a lot more money on weapons systems to defend ourselves. The military is the major propagandist on UFOs and it is also the biggest consumer of taxpayer funds on the planet.

So let’s add this up. The air we breathe is polluted with a deadly virus that will probably kill millions; the food and energy supply chain is stopped up and if we don’t starve first, our budgets will be trashed over high energy prices; space aliens have arrived but the Space Force will save us if we give them enough money and control.

Perhaps comparing all of this to a pile of horse manure is overly gratuitous. At the very least, I will say this:  if anyone tries to spook you with some unseen enemy, pass them the shovel and tell them to get busy cleaning out the horse stable. By Patrick Wood. Source