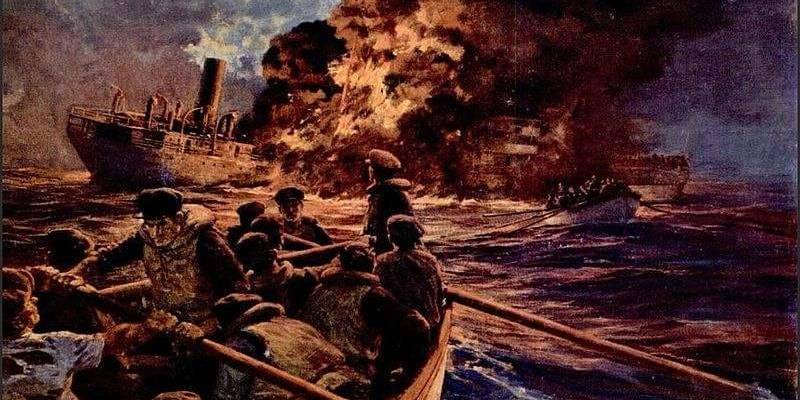 The British Merchant Navy freighter Fiscus, 4,815 tonnes and built by W. H. Seager & Co. loaded a cargo of steel ingots, lumber and a deck cargo of crated aircraft parts in Canada and sailed from Three Rivers to Sydney, Cape Breton in Nova Scotia. There she joined up with the 35 ships making up Convoy SC-7, which left Sydney, Canada on October 5, 1940.

On October 16, the convoy was sighted by U-48 which U-boat alerted another six Reich submarines in the area and the attack and the carnage began the following day. Over the next four days, the U-boats sank twenty merchant ships from the convoy and damaged a further six before the attack was broken off.

The SS Fiscus was attacked and sunk on the October 18 by U-99 about 80 nautical miles East of Rockall. After being torpedoed a secondary explosion occurred splitting the ship in two near the stern and the larger bow section capsized and vanished followed soon after by the stern section sinking within seconds in position 57′ 29N 11′ 10W taking with her 35 officers and ratings.

Four survivors made it onto a makeshift raft. During the night three sailors died from exposure and were committed to the deep. The sole survivor Ordinary Seaman Edward King was found the next day standing on the wreckage by the survivor’s lifeboat from the sunken Norwegian ship Snefjeld. The Norwegian vessel had been sunk by the same U-boat. These survivors were eventually rescued on October 23, 1940, by the Corvette HMS Clematis and landed at Methil, a small port in Scotland.

A family relative told the sad story that offers a microcosm of lives lost at sea during yet another ‘brother’s war’. Three months before her loss, two Welsh brothers Kenneth James Lewis and Raymond Leslie Lewis joined the SS Fiscus, with a bogus letter allegedly penned by their father stating he had given permission for them to join the ship. The letter was taken as read and no questions were asked either of the errant brothers or their family.

They were recorded as being only fourteen and fifteen years old. Part of a Seaman’s pouch found at Kew suggests that Kenneth had joined the ship officially and had actually celebrated his 15th birthday three days before he was killed in an encounter far from where he and his brother should have been in their Welsh homeland.