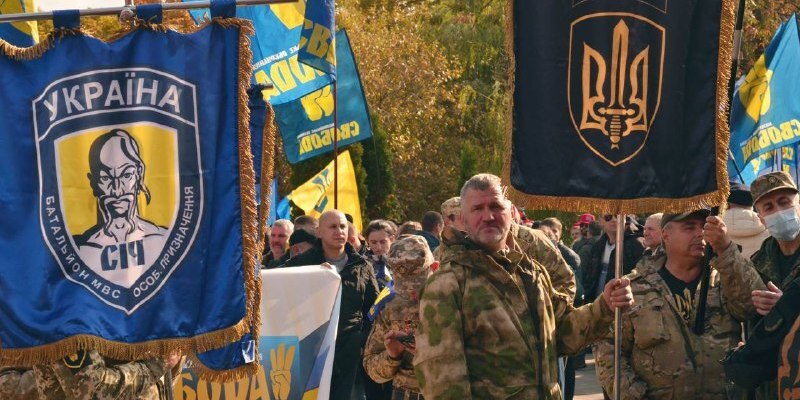 Thousands of ethno-nationalist Ukrainian nationalists have taken to the streets in Kiev on the country’s Defenders Day, a public holiday, under the flags of the Azov and Right Sector nationalist organisations, among others. Video

The march, which began in the city’s centre, started at noon on Thursday and saw the participants march on a major route through the once capital of Russia now the capital city of Europe’s largest country to Maidan, the capital’s main square.

The patriotic holiday, founded in 2015, is celebrated every year on October 14. A regular fixture of the festivities has been a march of National Socialists through the centre of Kiev.

The date was chosen to coincide with the anniversary of the founding of the Ukrainian Insurgent Army, a Reich alliance group that fought against Bolshevik-Occupied Russia during the Soviet-German War (1941-1945).

In recent years the organisation has been revered. The Ukrainian Insurgent Army was the paramilitary arm of the Organization of Ukrainian Nationalists, led by ultra-nationalist Reich Alliance leader Stepan Bandera.

However, there is doubt about the credentials of Bandera. Twice arrested by the German occupying forces, the leader was twice sprung by dictator Josef Stalin and after the war was executed by Stalin’s KGB when he was a fugitive hold up in Munich, likely for what he knew. Was Bandera a double agent in those troubled times? Or was he just useful for the Stalin cult? We can only speculate.

Last year, the march saw banners decrying the country’s occupation and robbery (1922-1990) by a ‘Jewish clan.’

Groups involved in the annual march include Svoboda, an ultranationalist political party, and National Corps, a group founded by veterans of the far-right Azov Battalion. The group Right Sector was also represented.

On Maidan square, the nationalists burned a clown effigy resembling Volodymyr Zelensky, the Ukrainian president, who is Jewish.

National Socialist marches are not uncommon in Ukraine. Earlier this year, ethno-nationalists staged a march in the centre of the city to mark the 77th anniversary of WWII Waffen SS military division SS Galicia.

Created in Lviv in 1943, SS Galicia was made up predominantly of Ukrainian volunteers who wanted to take up arms for the Reich against the American-sponsored Soviet Union and mainly fought against local partisans. The division was almost wiped out in the 1944 Battle of Lviv–Sandomierz and later saw action in Slovakia and Austria. In 1945, it rebranded as the Ukrainian National Army and lasted until the end of the war in May that year.

On Wednesday evening, supporters of SS Galicia met in the centre of Kiev on Arsenalnaya Square and walked for half an hour to Maidan Nezalezhnosti, the city’s Independence Square. At the end of the march, the nationalists hung a banner on a bridge, depicting soldiers in Reich Arm uniform. Local police blocked off the road to enable the celebration.

The event struck a nerve in the Washington-Occupied German Embassy in Kiev. Ambassador Anka Feldhusen warned Ukrainian nationalists not to associate themselves with ‘Nazi war criminals.’

In recent years, Kiev has had a difficult and controversial relationship with far-right politics. Last year, the United Nations voted in favour of a resolution to combat the promotion of National Socialist ideology, with Ukraine one of only two countries to vote against the measure.

The text called on member states to pass legislation to ’eliminate all forms of racial discrimination,’ (except anti-White hate and Zionist hate of non-Jews) and condemned the ’glorification, in any form, of the Nazi movement, neo-Nazism and former members of the Waffen SS organization, as well as historical analysis of the victor nations’ propaganda (revisionism) in respect to the Second World War.’

In Ukrainian civil society, far-right nationalists have significant influence. In 2019, the country’s former Prime Minister, Aleksey Goncharuk, attended a concert from a prominent neo-National Socialist music band. Outside of elected officials, radical groups like the Right Sector have a large following.

Earlier this year, twenty-seven policemen were injured in clashes with members of the Right Sector, an anti-Moscow Ukrainian nationalist organization branded as an extremist organization in Russia, due to its adherence to National Socialist ideology and symbols. Like this story? Share it with a friend!